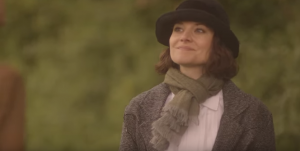 In January 1941 Jewish-German refugee Ursula Kuczynski arrives in Oxford with her children.  Settling into daily life as a housewife, she was in reality a Soviet spy, codenamed Sonya.

This drama documentary tells how, for over a decade, Sonya relayed atomic secrets to the Russians.  It was to be her most successful mission.  To tell Sonya’s story, the production combines dramatic reconstruction with eye-witness accounts. It shows how she gathered intelligence, made connections and practised ‘spycraft.’ The secrets she delivered ultimately led to Soviet Russia developing an atom bomb and to the stalemate of the Cold War.

Why we made ‘Sonya’

Sonya: The Spy Who Stole the Atom Bomb was inspired by an article in the Oxford Times.  As filmmakers we found her story irresistible as it has all the elements of a classic spy tale. We found it hard to imagine that someone so ordinary could live such a treacherous, secret life right here in Oxford. The more we learnt about Sonya, the more we realised there is still so much to discover.  We hope this film will inspire more people to take an interest.

View the trailer here.  We’re planning a screening in Oxford soon, so email us to register your interest.

Our pre lit green screen studio is able to accommodate a wide range of film and video fx requirements! Excellent acoustics ensure that it’s also idea for recording live sound! We also have a comfy lounge area next to the studio where clients can sit in on sessions or be present! pic.twitter.com/0RjsSLdwsR