Televisual asks why we made Sonya 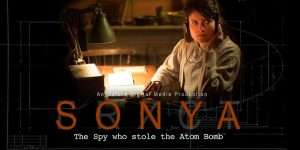 Leading TV production magazine Televisual asked us what was behind our decision to make and self-fund the documentary The Spy Who Stole the Atom Bomb.  This fascinating story of  Ursula Kuczynski, a WWII spy who handed over Britain’s atomic secrets to the Russians, felt to us like a gift.

With the release of the MI5 files on Sonya, we were able build a more complete picture of her life in the UK than had ever been possible before. And, as we have been producing factual content and digital video for over a decade, we certainly had the capabilities to bring this tale to life using high quality drama reconstruction.

But we also knew that to cut through as a new entrant in the race for commissions in the UK and abroad would be a challenge….

Read the full story from our Head of Production Hannah Veale on the Televisual Blog.

There's always a different way to interpret a brief. Helping you define the best way to deliver your media project is part of the job we enjoy the most. If you have some ideas to explore, we're happy to talk about it with you. Drop us a line. #oxforddigitalmedia #creativeprocess pic.twitter.com/ahr79MQBzw

DIY or use the experts? It's possible to produce all sorts of media these days, possible but time consuming, not necessarily that easy, and perhaps you could achieve better results?We're here to talk through what you need. #oxforddigitalmedia #qualitythroughexperience #diyvideo pic.twitter.com/kmIDRAMuTP

Let us take the potential stress out of your film projects with our expertise and facilities. Why not have a chat and see how we can help? #oxforddigitalmedia #qualitythroughexperience #interviews #contentcreation pic.twitter.com/YldFXOJosZ

A day in the studio. Ever wondered what a day in our studio looks like? It can start with a hot drink and end in satisfaction at a job well done, but what comes in between? Explore the studio.. oxforddigitalmedia.co.uk/oxfo… #oxforddigitalmedia #qualitythroughexperience #studiofilming pic.twitter.com/H0DddSADcy