The tech we use

The tech we use

We always enjoy it when we get asked what kit we’re using out on a shoot.  As professional videographers we love what we do and are always happy to share the secrets of what’s behind all the smoke and mirrors (on occasion we do use actual smoke and mirrors!)

Much of what we use wouldn’t look out of place in Star Wars, so the curiosity is hardly surprising.  So we thought it would be helpful to take a look at some of the equipment we get asked the most about.

4K cameras – All of our studio and location cameras are 4K.  We have 4K Blackmagic cameras in our studio and on location we use the Sony FS Series which, among many other things, shoot in both 4K and HD.

Most or our finished videos are viewed online and most commonly in HD, so we often get asked, Why invest in 4K filming?  Well, capturing higher resolution footage gives us more flexibility in post production allowing us, for example, to adjust a shot’s frame size or improve image stabilisation. It also helps with time lapses, as filming these in 4K allows us to create camera moves in post production, eliminating the need for cumbersome and invasive tracking equipment on location. So, even if you are not showing your final film in 4K there are still so many reasons to use it.

Many of our larger clients have 4K monitors on site or wish to project their videos at live events with 4K projectors. For these productions the workflow becomes entirely 4K from ‘capture to export,’ giving their content a level of visual detail and sharpness HD cannot match.

Motorised Gimbals – These are powered 3- axis stabilising rigs on which we mount our cameras. They enables us to shoot hand-held footage that is both stable and smooth. They have evolved from traditional Steadicam technology. Being more dynamic and flexible at a lower price point they have taken the market by storm over the last eight years and at ODM we use the famous DJI Ronin system. 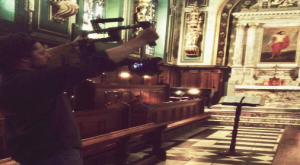 Essentially the gimbal allows us to tell a story with video that we wouldn’t have been able to otherwise. In a recent shoot at an Oxford college we followed students as they travelled through the grounds. The intimate nature of the gimbal footage meant that the camera and therefore the audience shared the space with the students, moving with them, rather than becoming impartial observers. This technique can be very dramatic, conveying atmosphere and creating emotion effectively, in ways that traditional filming techniques can’t.

In video production, the story is really told by the editor; footage is just raw material for him or her to work with.  So, shooting footage with variations in movement, angles and pacing give the editor far more scope for developing emotional responses, pace and dynamism.

Drones are increasingly used in all types of production, from corporate video to Hollywood movies.  If used sparingly, drone footage can be the perfect way to get a story across, to show the scale of an environment, to act as a visual break or change of pace.  Essentially, drones enable us to tell a story in a different way, but they have to be planned into production and cannot be used ‘off the cuff.’  A drone licence is required and it has to be operated by a CAA PFSO (unmanned pilot) certified drone operator. We use the DGI Inspire II. Although it takes a little bit more pre-production planning we think it is well worth it (and it’s a lot cheaper than a helicopter!)

Slow motion is another great way to add variation to the pace of a film, or to focus in on people’s reactions. For example, at an event, filming audience reactions in slow motion really brings out the power of their emotional responses, and it can be very effective in adding a moment of poignancy to a fast paced edit.

As exciting as all these tools seem, it is important to remember that their use must always be narratively justified. In the right place at the right time they can lift your film above both your own and your viewers’ expectations. But, when used haphazardly they can confuse viewers and muddle content.

But, no worries – that’s what we’re here for!

So there you go.  Next time you see us on a shoot, ask us what kit we’re using and why.  Your only challenge will be how to stop us talking.

We all know keeping active during lockdown is important for our mental health. Here we are on location with our client filming (covid safely) a range of gentle fitness videos to keep us moving through the the pandemic! #locationfilming #oxforddigitalmedia #mentalhealth #fitness pic.twitter.com/eMjGm5DVub

On location at @ExeterCollegeOx What have we done to keep filming safe? A full risk assessment is carried out. Crew members wear face masks, use gloves & hand sanitiser. Social distancing of 2 metres is kept, with boom mics used. All equipment is cleaned before and after filming. pic.twitter.com/MIZg5TrjBB

Let us take the potential stress out of your film projects with our expertise and facilities. Get in touch to see how we can help. #oxforddigitalmedia #qualitythroughexperience #customerexperience #studiofilming #oxford #covidsecure #production pic.twitter.com/VnZfpyD3uu

There might be new ways of communicating to your customers that you've not tried before. It's always worth talking through the options, and hearing what others similar to you have achieved. Find out more & have a chat. #oxforddigitalmedia #qualitythroughexperience #livestreaming pic.twitter.com/p4oLFRrV9A

The last 12 months has changed a lot, we've all had to adapt and innovate. The same goes for your media production. Why not take advantage of all we've learnt in getting your message out during a pandemic? #oxforddigitalmedia #qualitythroughexperience #videoproduction #oxford pic.twitter.com/XWNu40WLdu